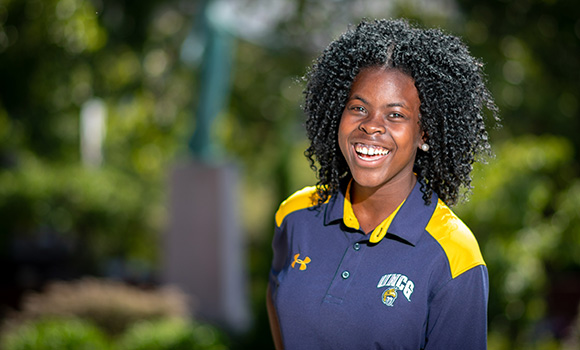 The long-term goal for the political science (pre-law) and communication studies double major is to work in Washington, D.C., as a lobbyist representing marginalized groups.

Until then, she’s cutting her teeth as Student Government Association (SGA) president, representing the UNCG student body and working to make a difference on campus.

Roary and vice president Olivia Tarpley have a three-part platform. First, they’re focused on engagement – helping students from different backgrounds connect and engage with one another in meaningful ways. Second, they want to educate students on the role of SGA.

“I want people to know that SGA does more than allocate money to student organizations,” Roary said. “We’re a governing body, not a programming body. We exist to advocate for students and make changes.”

The last pillar of their platform is empower ­­­– encouraging students to take hold of and shape their UNCG experience, something that Roary has certainly accomplished during her time as a Spartan.

In addition to her role as study body president, Roary is a Spartan Guide, a Lloyd International Honors College student and ambassador, a student advisory board member with Campus Vote Project and a member of UNCG’s Association of American University Women (AAUW) chapter. This past summer, she studied abroad in London, and previously she spent her summers working in D.C.

Roary’s impact can be felt across campus. But she’s quick to brush off any recognition.

“If no one knows my name, that’s fine. But I want people to know the work I do for UNCG,” she said. “I’m very passionate about making a difference at the school that I love.”

Her approach? Bottom-up, not top-down.

“It’s not so much about what I want – it’s about advocating for what our student body wants,” she said. “I want students to feel like they have a hand in what SGA does. We want to make SGA a truly representative body.”

Learn more about Roary in the Spartan Spotlight video below.

Give to the Department
Emergency Information
Report Concerning Behavior

Copyright © 2022. UNC Greensboro. All rights reserved. | If you have a disability and are having trouble accessing information on this website or need materials in an alternate format contact smparke3@uncg.edu for assistance.